Follow the adventures of Sam Harris where her postings to remote and dangerous countries lead to involvement in mystery and intrigue.

Can you resist? Get it now!

Nobody told her geology could be dangerous. When a rookie geologist discovers a clue to a lost Inca treasure, her first job gets a lot more thrilling.

It's 1987. Geologist Sam Harris is a woman in a man's world - overlooked and underpaid, but resilient and passionate. Desperate for her first job, she accepts a contract with a dodgy entrepreneur exploring for gold in the remote rainforests of Sierramar.

When she uncovers a clue to a treasure buried deep within the jungle, she is sent on an expedition to find it, but one of her colleagues is plotting to seize the hoard and will kill to get his hands on it.

Will Sam find the treasure or will her first adventure be her last?

Download Fool's Gold for free and have an adventure on your sofa.

More info →
GET YOUR FREE BOOK

Start reading this fast-paced semi-finalist from the 2018 Adventure Writers’ Competition.

It’s 1988. Geologist Sam Harris needs an escape. When she learns that her friend, historian Alfredo Vargas, has gone missing in Sierramar, she gives her personal life some much needed space and takes the next plane there. But she never expected to be following the trail of a devious Nazi plot nearly 50 years after World War II …

Hidden in a remote mountain setting, the village’s dark history has remained a secret. If Sam fails to uncover it in time, the Nazis will ensure Alfredo’s permanent silence. Can Sam blow the lid on the conspiracy before the Third Reich makes a devastating return?

Hitler's Finger is the second book in the riveting Sam Harris Adventure series. If you like gutsy heroines, complex twists and turns, and heart-pounding action, then you'll love PJ Skinner's thrilling novel.

Buy Hitler's Finger to take down some modern-day Nazis today!

It's 1990. Geologist Sam Harris goes to Simbako in West Africa to work in the diamond fields of Fona. She is soon involved with a cast of characters who are starring in their own soap opera, a dangerous mix of superstition, cultural practices and ignorance (mostly her own).

When she uncovers the tale of a massive diamond missing since a rebel attack during the civil war, the stakes are raised even higher. Add a love triangle and a jealous woman who wants her dead and Sam is in trouble again.

Where is the Star of Simbako? Is Sam going to survive the chaos?

The Star of Simbako is the third book in the riveting Sam Harris Adventure series. If you like gutsy heroines, complex twists and turns, and exotic locations, then you'll love PJ Skinner's thrilling novel

Buy The Star of Simbako and have a thrill today

It’s 1993. Geologist Sam Harris gets a call in the middle of the night that takes her to the Masaibu project in West Africa. The project is collapsing under the weight of corruption and chicanery.

She is forced to navigate murky waters to get it back on course, hindered by interference from people who want her to fail. When poachers invade the elephant sanctuary next door, her problems multiply.

Can Sam protect the elephants and save the project or will she have to choose?

The Pink Elephants is the fourth book in the Sam Harris Adventure series. If you like gutsy heroines, complex twists and turns, and heart-pounding action, then you'll love PJ Skinner's thrilling novel.

Geologist Sam Harris has been around the block, but she's prone to nostalgia, so she snatches the chance to work in Sierramar, her old stomping ground. But she never expected to be working for a company that seems to be breaking all the rules.

When the analysis results from drilling are suspiciously high, Sam makes a decision that puts her life in peril. Can she blow the lid on the conspiracy before they shut her up for good?

The Bonita Protocol is the fifth book in the Sam Harris Adventure series. If you like gutsy heroines, complex twists and turns, and heart pounding action, then you'll love PJ Skinner's thrilling novel.

It’s 1998. Geologist Sam Harris is desperate for money so she takes a job in a tinpot mining company working in war-torn Tamazia. But she never expected to be kidnapped by blood thirsty rebels.

Working in Gemsite was never going to be easy with its culture of misogyny and corruption. Her boss, the notorious Adrian Black is engaged in a game of cat and mouse with the government over taxation. Just when Sam makes a breakthrough, the camp is overrun by rebels and Sam is taken captive.

Will anyone bother to rescue her, and will she still be alive if they do?

Digging Deeper is the sixth book in the riveting Sam Harris Adventure series. If you like gutsy heroines, complex twists and turns, and heart-pounding action, then you'll love PJ Skinner's African thriller.

Buy Digging Deeper and experience the suspense for yourself.

More info →
Get your copy

Forging a new career was never going to be easy, and Sam discovers she has not escaped from the culture of misogyny and corruption that blighted her field career.

When her past is revealed, she finally achieves the acceptance she has always craved, but being one of the boys is not the panacea she expected. The death of an old friend presents her with the stark choice of compromising her principals to keep her new position, or exposing the truth behind the façade.

Will she finally get what she wants or was it all a mirage?

Concrete Jungle is the seventh and last of the Sam Harris Adventures. If you like strong female protagonists, international adventure and financial thrillers, you’ll love Sam's last hurrah. 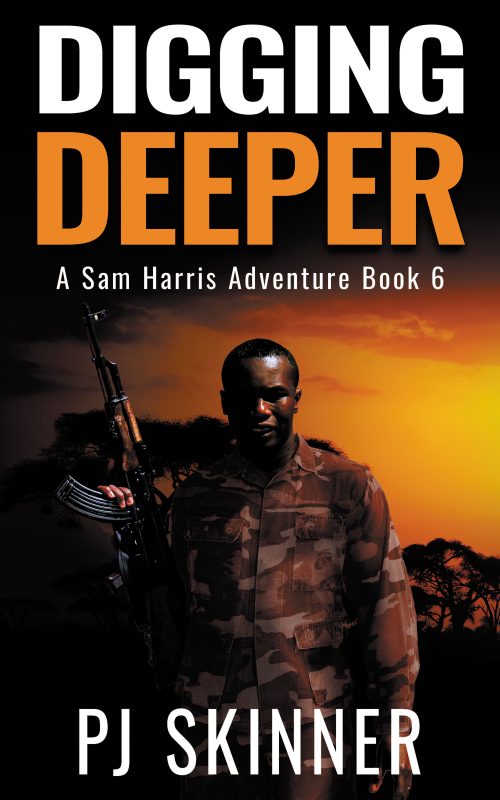 Buy This Book Online
Get your copy